Thoughts on being a bald science fiction icon at Comic-Con

I want to share my thoughts about wearing my Ilia costume at Comic-Con. Attached is a photo of the original character, played by Persis Khambatta in 1979's Star Trek - The Movie.

For my two days in the costume, when people looked at me, they DIDN'T see a woman with cancer, or a masculine-looking female. They saw me as normal and healthy - more than that, they saw me as beautiful and sexy! (I apologize if this sounds boastful, but the character is much-loved and I nailed the…

If you're in Southern California, join us for an International Alopecia Day luncheon in San Diego on Saturday, August 2. Bonus: I'm planning on going on a Bald Mannequin Project photo shoot in the nearby mall after our lunch for those who would like! Celebrate the 5th annual IAD with us from 11:30am - about 1:30pm at Cozymel's in the north part of San Diego near I-805. Private room, party! Please RSVP to me if you would like to come. Family, Kids, Friends are welcome. Bald is optional -…

What are you going to do to celebrate International Alopecia Day this year?

Be a part of the fun as people all around the world celebrate and raise awareness.  Wherever you live, plan a party, an event, or just take a photo of your beautiful self on the first Saturday in August - August 2, 2014.

Last year we had over 105 people from 22 countries - will your hometown be represented in the annual YouTube video?

Here's all you need to know:…

International Alopecia Day began several years ago. My idea was for there to be a day when people with Alopecia Areata could celebrate who we are, and perhaps try going out in public bald for the first time in the company of others with Alopecia. The more cities and countries we have participating each year, the more IAD will…

Being a bald goddess at Comic-Con

A friend offered me a 4-day ticket to Comic-Con this year, so I decided to make a costume I've thought about doing ever since I lost my hair in 2008 - the bald and sexy "Ilia" from the 1979 Star Trek movie. She spent most of the movie in a skimpy costume and is the only bald leading lady I think Hollywood has ever featured. For those who haven't seen the movie, here's a nifty 10-minute version of the whole movie SPOILER ALERT...this gives it all away:…

I don't know if anyone has started a blog about this, but since I just registered to attend my first NAAF conference in St. Louis June 27-30, I'm curious which of my AW friends are attending.

Outrageous alopecia "joke" by Jay Leno on Tonight Show. Anybody else want to write to NBC?

Last night on Jay Leno he did a bit about why products at the 99 cent store might be 99 cents. He showed a "fashion doll", somewhat like a Barbie, and after he opened it, showed why it was only 99 cents.

The doll only had long hair around the outline of its scalp, and was otherwise bald. He joked perhaps one could do a Donald Trump comb over...the usual yuks.

Then he stated "Maybe its an Alopecia doll I don't know".

I found this incredibly insensitive and insulting. I…

The Office episode where character shaves her head

Did anyone see the January 10 episode of "The Office", entitled "Lice"? If not - you can watch the whole thing here:

If you do not want SPOILERS, STOP READING this until after you've watched the episode. I'm about to tell what happens....

The office floozy, Meredith, is discovered to have head lice. It actually was likely brought to the office by Pam via her…

Tired of seeing all those bald mannequins in the clothing stores and windows and thinking "Why do the fashion world and advertising media think FAKE bald women are so beautiful, but never use REAL bald women?" Maybe we can change that.

THIS IS THE START OF A REVOLUTION!

Step 1: Go to the mall to one of the many stores featuring bald mannequins. BE BALD (very important step).

Step 2: Put on the same outfit that the mannequin is wearing, or stay in your own fashionable…

My 5th anniversary of the woman I am now - thanks to being bald!

January 30 will be 5 years since the day I took control of my fast-departing hair, and shaved my head. Universalis followed shortly. I'd like to share what I've learned, and how being bald has affected me. Here's a photo taken on January 30, 2008, shortly after I shaved my head. 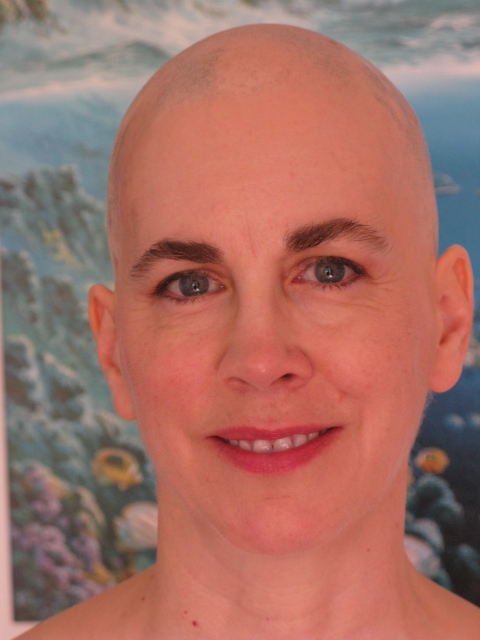 I began going out in public bald only a few months after shaving. I took "baby steps" to…

So you think we have it tough having no hair?

Please read this and watch the video in the story, then take a look in the mirror.

This is not to deny our very real, life-impacting, and serious issues associated with our hair loss. But, this sure puts my baldness in perspective for me.

Take a look at this article about a woman with a rare medical condition that only two people in the world are known to have. Once dubbed "The World's Ugliest Woman", she has risen above her challenges and has become a motivational speaker and author. I think this story has a lot of relevance for those of us who feel like freaks due to our hair loss, particularly if we're bald in public.…

Kinda gross - but could this be a cure for alopecia areata?

I just saw this news story. It doesn't mention AA, but this new treatment is being tested in clinical trials on Crohn's Disease. I wonder if NAAF is aware of this. Here's the story, with the link below:

If you had a chronic and potentially debilitating condition such as rheumatoid arthritis or Crohn's disease, and swallowing the eggs of a pig parasite could help, would you do it?

The team at Coronado Biosciences Inc is betting you would.

WHAT ARE YOU GOING TO DO ON INTERNATIONAL ALOPECIA DAY THIS YEAR?

A small get-together with friends? Lunch? Picnic in the park? Walk/run? Info table at a mall? Party? Check out the previous years' videos for ideas. Plan something small or large.

It's our day to raise public awareness and celebrate with friends. For those of you who've been wanting to try going out in public bald for the first time, THIS is the perfect day!

Be a part of this year's YouTube video slideshow…

I stand up straight and proud

I feel elegant and unique

I'm cool when other people are hot

I rock my large collection of earrings

I sometimes wear jewels or decorations on my head

If you haven't tried going OUT in public bald and would like to, an opportunity is coming up soon. 2012's International Alopecia Day is Saturday, August 4! Join the…

Three years ago (wow, time flies!) I posted a blog about Michael J. Fox, his Parkinson's disease, and how his words are great inspiration for us Alopecians:

In today's Parade Magazine (which comes with our local paper, and also around the country), there's an interview with him. I have to share a couple of his…

Has anyone heard anything about this project?

There are several YouTubes about the making of it at Michigan State University. Here's one that shows one of the screenwriters who is apparently a woman with AA:

Happy 4th Anniversary to me!

Four years ago today I took back my life by shaving my head smooth. In my first photos on my page, you can see what my hair looked like the night before, and what I looked like right after shaving.

2. It's okay to be bald in public - people don't run away screaming at the sight of a bald woman.

3. I can still feel beautiful and feminine without any hair.

Women have asked me where I get the Turkish scarves that are lightweight cotton and have handmade edging. I demonstrated these in my video "Alternatives to Wearing a Wig". The person I bought the scarves in that video from in 2008 is no longer in business.

There are a number of sellers online, and I recently found a new supplier on eBay. She's a woman in Istanbul, Turkey, so the scarves took a little longer to reach me. But, the price was very reasonable compared to others I've bought…

Here's a link to an interview with the newly-bald actress(for a play about a cancer patient, of course):

I've been told before that I look younger as a bald woman. This confirms that possibility to me. I think she looks WAY younger.

She looks so "normal" to me....too bad she doesn't to most people. We just need more of us bald ladies OUT there.