Today I am fabulous

Doe anyone know of any wig salons in New Jersey? I want an establishment that is going to be compassionate. Somewhere that will take the time to explain and explore the different options. I am looking for a place where i can be free to try on as many wigs as i'd like until i find the right one and also somewhere that offers a variety of options lace, human hair, synthetic etc.. Any posts would be greatly appreciated! Thanks. :)

Fourteen years ago this Fall I shaved what was left of my hair and went out to dinner with two of my closest friends. It was a chilly night to be walking outside bald, but I didn't notice the cold. I felt so anxious to be seen in public for the first time without my hair that I couldn't think about much else. Fourteen years later, I still have Alopecia Areata and a bald head. I am happily married to a bald man (male pattern) and don't think as much about my hair. I am proud that I have the… Continue

AFter having Alopecia since 2000 . I started seeing this dermatoligist in NYC which started me on this treatment called Squaric Acid.. WHat it does deflect the immune system from attacking the hair follicles on my head and instead begin to attack the Acid that is applied on the hairless spots.
I have been on it for 2 months now and the doctor began to notice colorless hairs coming out.
I am using this Calosol cream on my face and eyebrows as well since i dont want that acid close to… Continue

What better way is there?

September is Alopecia Awareness Month and, as it gets underway, I must confess that I still haven't found a better way to promote alopecia awareness and acceptance than by showing my love for my alopecic and adorable wife everywhere we go.… Continue

A change in perspective, for a few days

I haven't been on AW or online much lately. I need to get into the habit of checking in at least once a week or so; it seems such a waste of a good resource and lovely people to NOT do so.

I was recently called back in to the radiologist's office because of a suspicious mammogram (TMI? Sorry.) After more imaging, an ultrasound, and finally a biopsy, I rec'd the good news that I don't have cancer. My first thought was "losing my hair wouldn't be so bad; I can handle… Continue

I am so heart broken Is there anyone else in Michigan that have Alopecia? I dont feel so. I live with alopecia and so does my son He is fiveteen and in high school. I just feel so alone and i also feel really bad for my son. Please send me encouraging words my way

Having alopecia, what kind of work do you do?

Do you find it easier or harder having alopecia and this job?

Do you wear a wig or scarf to work. or go bald?

Do you wish you could find a different job that was more supportive of AA?

Does your employer support you or do they even know?

Just curious...I guess over time it gets easier to wear a wig everyday once you get used to it.

I can't beleive it's been three years already! I remember when I lost all of my hair, the depression, anger, and sorrow I felt. I cried and cried for weeks. I didn't think I deserved it, I even questioned if there was a god. How could god let this happen? This group and another have helped so much! I am back to my old self. Of course I get down in the dumps sometimes, but I have a guy that loves me, a family that loves me, my music and my friends, thats all I really need!
Moving to another… Continue

I finally added this photo to my facebook page, i have nothing to hide anymore...now to share with all you beautiful people. 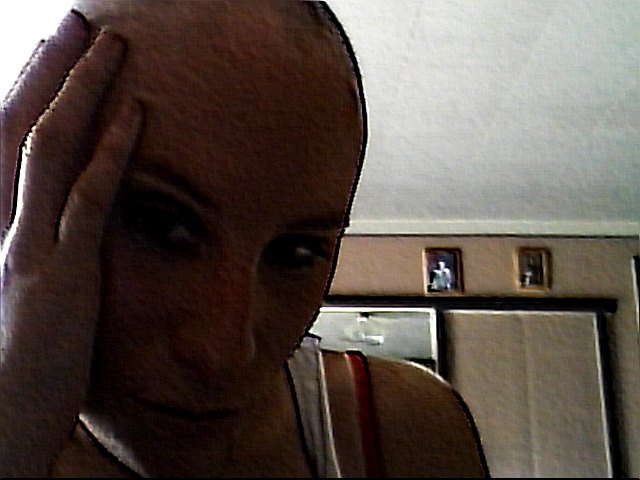 Not only did I post my pic on my facebook page last night but I went to work bald today!!!!!!! I went out to lunch with co-workers and even renewed my drivers license all without hair. I felt so good about myself today.

I shaved my head on Tuesday night September 7th. There was no hesitation and the experience was positive. I had the night off from work, but went to work just to see some reaction. All positive comments or no comments. Afterwards, I went to Super Walmart to walk around. I did not get any 'stares' and if I did I was too far on cloud nine to notice. I love it! Now if I can master the maintenance stages of shaving every other day (maybe even every day if necessary) and finding a good sunscreen,… Continue

I don't know if she has Alopecia or not. In most of the pics I've seen of her over the years, she has a low cut. But right now she is working the bald look. I think she looks great.

She was honored yesterday at the White House.
ttp://celebs.gather.com/viewArticle.action?articleId=281474978504355

Another pic of her. ...Now to continue with my previous post, No big deal - hair is just an accessory in life

I took my daughter to the doctor last week and she confirmed that the thinning on the back of her head is too symetrical to be anything other than alopecia. She has a 1.5 inch band of hair missing at the nape of her neck, which looks like it might extend up towards her temple area on both sides of her head - this would be similar to when I had this stage and the dermatologist called it 'ophasis'… Continue

Will this Blog go through about being molested and having alopecia?

This is my 3rd time trying to post this:

It may seem like I'm texting you bcz that's how short I plan to be...

Hopefully, when you find this you are in a good fram of mind and take the time to respond.

This is very important to me...I could be wrong...I'm definitaly not saying I'm right, but here goes MY

BLUNT QUESTION: Were any of you molested?

Our appearances in this sexy world magnifies the imortance of image.… Continue

I finally have a diagnosis after 11 doctors

Hi everyone. Well it took me seeing 11 different medical professionals including 4 dermatologists, endocrinologist, internal medicine specialists, allergist and the dermatologist I saw today.

The only dermatologists that I had been able to get into see up until today were all male. I found the experience of seeing them intimidating and not very helpful because they couldn't understand the emotional stress I felt being a female. They all believed it was in my head and told me that I… Continue

Down in the dumps

I shaved my head just over two weeks ago and I was doing really well with the decision for the first week and a half but now I'm not so sure I'm happy about it. I think my ears stick out to far, I dont like the looks I got when I went out scarfless for the first time in public over the weekend. It has me really down about my decision. I mean I know it was the right one but I guess it just sucks today to have no hair. To top it off I started losing more eye lashes then my normal 1 or 2 a week,… Continue

So I shaved my head thursday night after a rather large clump of hair fell out and I decided I couldn't take it anymore. Friday I went out, and wore a scarf, and got looks, and a really sweaty head. Friday night my boyfriend got into town (he lives 4 hours south) and he had also shaved his head (such the sweetie). On saturday we decided to go out and he told me "Don't wear the scarf for me or anyone else. I love you for you, and I think you look beautiful the way you are." (Hes WAY to sweet,… Continue

Well I haven't posted for a while.

The patch on the back of my head has grown back pretty well - hair is quite short and thin still but its better than the glaring white patch of head that was there before, easier to hide now.

So, alopecians...do you find yourself putting off going out (to where the opposite sex is), flirting, dates, expression of love, sex, engagement, marriage (hey, my order may be off for some of you...sorry...) until some assumed date that hair will miraculously all grow back? How many great ones did you let get away while doing so? How many Practice People did you waste time with or experiment revealing to, just to "get the experience" before The Real One? Most importantly, however...what do you… Continue