A ready-to-go look after a convertible ride. 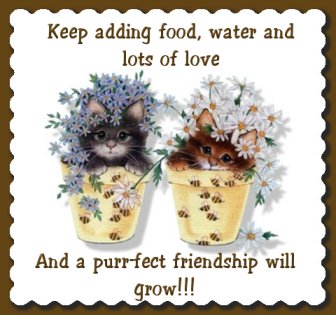 Well, I AM RJ posted a forum called "What has alopecia done for you?" I wanted to read the responses, and well just got down.Everyone seemed strengthened for it and strong. So, I started thinking "what has alopecia done for me?" My answer, nothing. It has made my daughter's life such a struggle so far, and I am not looking forward to the future with all of the frustrations to come with teasing and dating. I don't know what to do. I am so upset tonight with the thoughts that this disease has… Continue

I was having a coffee yesterday on the ASU campus and I saw a girl that appeared to have AT/AU. She looked very pretty, she didn't wear a wig or a hat. It was my first time actually seeing another girl with AA/AT/AU. I would have like to have spoken to her but I dunno what I would have said.

Not having wet hair when the electricity goes out.

Whatdya mean it may not come back?!?

So I guess I'll start in September of 2007 -- when I went to my regular hair stylist for my regular monthly haircut. I had a full head of thick, dark hair. Or so I thought. She started cutting and pointed out that I have been thinning at a rapid rate. I honestly hadn't noticed a lot of hair loss previous to her holding up the mirror to show me. I was shocked, to say the least -- who looks at the back of their head on a daily basis? I didn't feel it while shampooing. Nothing -- because I…

I have been praying for my little girl! While I don't mind this condition, I don't want her to endure this harsh world. Children can be cruel. She was diagnosed with Alopecia Areata like 6 months ago. To think I was in total disbelief because this crazy condition has been a family trait. I am the only one to ever have AU. All that to say I cried many days for this child because I remember the hard times.

She reacted to topical treatments within a matter of months, something that… Continue

I've been recently (within the last 6 months) been diagnosed with Alopecia Areata. What I find frustrating is that my bald patches are so big I've given up and have shaved off my hair, but I still get random stubble patches.

I feel like if I'm not going to have hair, I'd rather just stop getting these patches of hair/no hair. I want my head to make up it's mind. I feel like I'm in hair limbo.

My fiancée, Cheryl Carvery, is not the first alopecic woman I've dated. Another one of my female companions was also bald, but I had forgotten all about it because my ex always wore a scarf and never made much at all of her baldness because, clearly, she had much deeper concerns.

My ex, whose name was Karen, also had one of her breasts removed due to cancer and constantly battled the disease after being diagnosed in her late 20’s. She endured a mastectomy and a seemingly endless…

Hello- I am looking for help... My daughter has Alopecia universalis... We were informed that insurance does not cover "full cranial prothesis" Our insurance company said,"it is not a necessity"... its a cosmetic thing.. Does any one have any help on this ... if it was an arm or leg, then they'd cover it... well (not to be mean but you can live with out an arm or leg... hello..). I am sooooo upset...

I am so amazed by what is happening in my life right now...some passions and hopes that have been unfulfilled for many years are starting to come true one after the other. One of them happened today, and all thanks to AW. We had our first support group meeting here in the Phoenix area. I guess there was a meeting many years back that fizzled out. But I have been here 7 years and looked a few times in the past 7 years and there has not been one.

Five of us ladies came and we had a… Continue

I talked to my mother yesterday. We have been discussing going to the NAAF Conference this year since January, and because she said she wanted to go, I went ahead and registered her for the conference. Yesterday morning I talked to her on the phone, and as usual she asked me if I was going on the family vacation this year. Just as I have answered every year like clockwork for the last 6 years, I answered that no, I wasn't. I don't like traveling with my mom's other kids because they aren't good… Continue

I ordered a new wig. It's the same as my old one. I'm still not brave enough to try a different style. The style and color look nice anyway. Oh well, maybe in another 6 months when I get a new one again I will be a little more comfortable and make that change. I did order something called hat head. It's that thing that looks like a sling shot on the top (straps to hold it on your head) and has hair around the edges so you can wear a ball cap or bandana. I’m excited about it because I think it's… Continue

This moment's for you

Life has a way of thrusting upon each of us conditions and circumstances that challenge us to discover what truly matters. Of course, to seize such moments and growth opportunities, we must first recognize them. We must see past whatever problem we're facing and truly grasp the growth potential. As one old song counsels, the one thing we must do right is, the day we start to fight, keep our eyes on the prize; for it's really how we deal with things, and not really the things we… Continue