A couple of days ago a friend from elementry school messaged me on facebook, hadnt talked to him in years. While we were talking he asked about my lack of hair. When i told him what my situation was he said," Wow really you always had such beautiful hair, i had no idea." makes me cry to think about it sometimes. I really miss my beautiful long hair and now that my eyebrows are gone and my eyelashes are going, it makes me really thankful that i didnt loose all my hair when i was in high…

Has anyone else created artwork based on your thoughts about having alopecia?

I have a few pieces. One I just finished today. Enjoy!
If you have some work of your own, I would love to see it!! :) 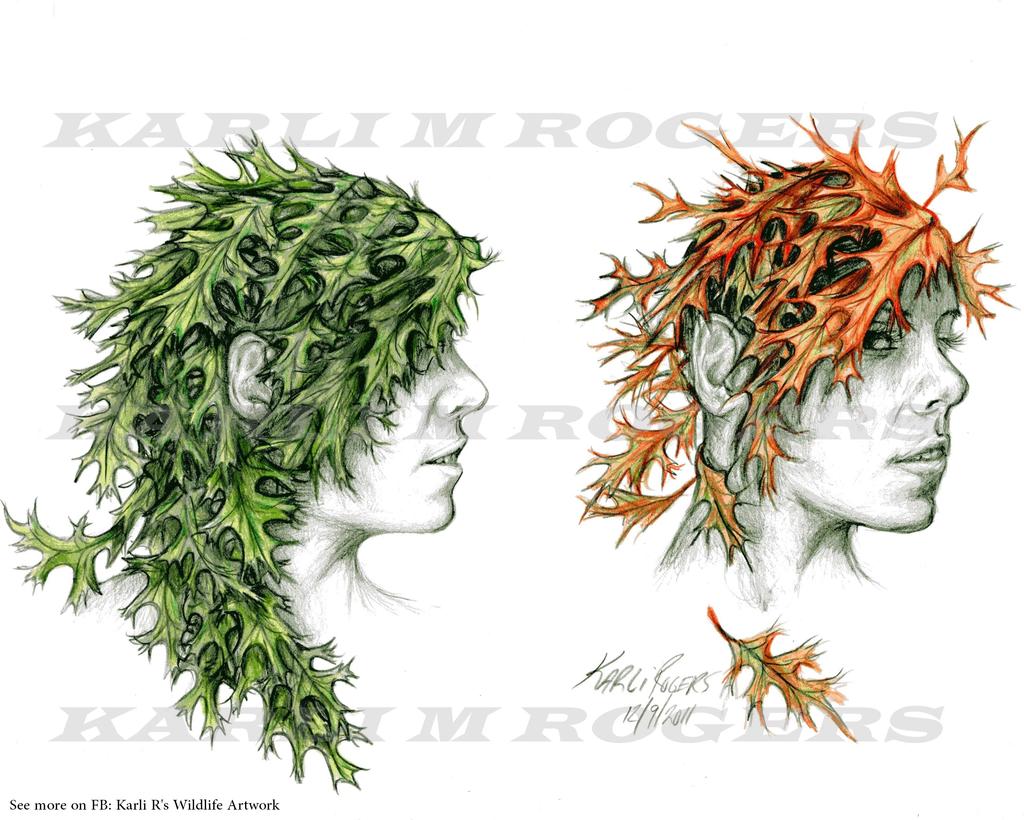 Recently I had done an interview with the editor with the local newspaper. It was about my alopecia journey and my going boldly to the gym without having any head covering. I was thrilled to see it printed in the newspaper 2 weeks later ( its a weekly paper) and even more shocked to see my picture on the front page. A small pic, but still front page.… 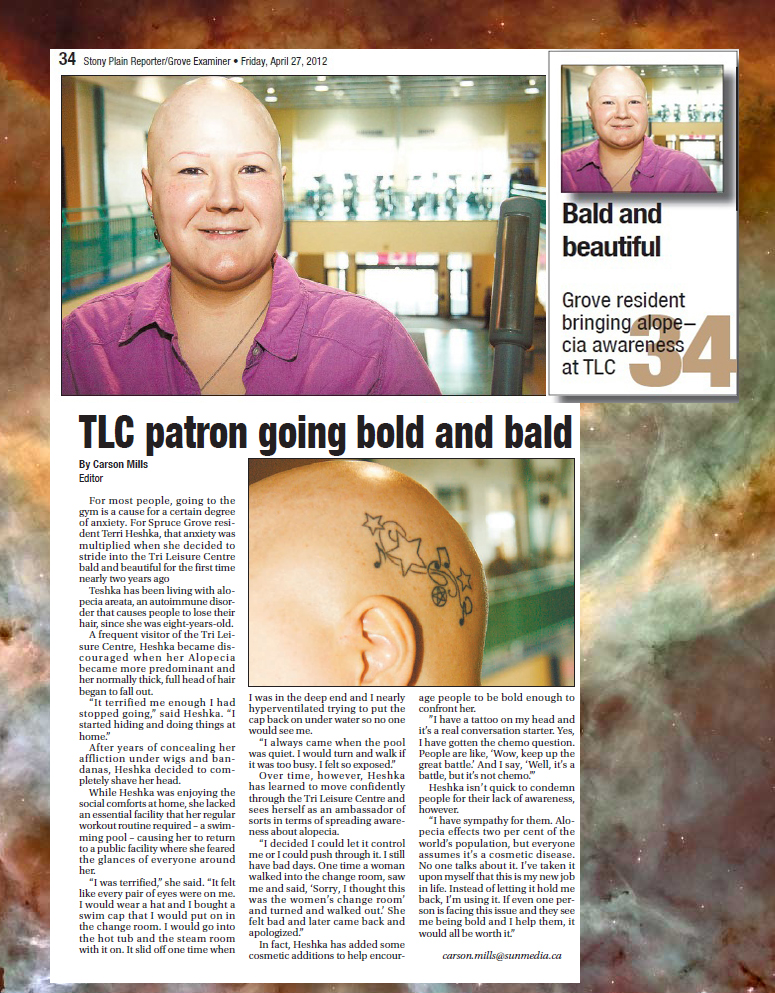 Well i wrote a while back that my hair was falling out for a 2nd time and was praying it would eventually stop! Well its still coming out and ive lost alot now and have more patches, it is now getting difficult to hide it and im so paranoid when im out in the wind. i have been and picked a wig for just incase it gets worse but i really dont feel ready to do this again, i dont want to shave my hair off if it keeps falling out even know its better to, i dont want to wear a wig again, i dont…

"Keep ya head up"

“I know it seems hard sometimes but remember one thing. Through every dark night, there's a bright day after that. So no matter how hard it get, stick your chest out, keep ya head up.... and handle it.” ― Tupac Shakur

How in the world do I open up to my friends about not having hair?

How in the world do I open up to my friends about not having hair?

I was wondering, I currently keep having dreams that my hair is growing back. I dont know if anyone else believes in "6th senses" but my dreams seem to always come true about a month or two later. So I figured this is a sign to search for new treatment. Also there are a few longer hairs growing on my head that are very very light. Also, my bottom eyelashes are almost in. I have Alopecia Universalis and this normally happens in the summer but I've had my bottom eyelashes all school year. So I…

WENT TO HAVE MY M.R.I. DONE FOR MY BACK AND NECK AS I WAS GOING TO GET INTO THE MACHINE IT STARTED TO PULL MY HEAD-WIG I HAD TO TAKE IT OFF BECAUSE THE WIG HAS MENTAL IN IT I HAD TO OFF THANK THE LORD I HAD A HEAD RAGE TO PUT ON AT THE TIME FOR I CAN FEEL BETTER AND NOT NAKE IF YOU NO WHAT I AM SAYING

Today I had a bit of a confidenceboost from one of my good friends and thought i'd like to to share it :)

I am at the moment still walking around with my natural hair but it is getting thinner and thinner each day, and so I will shave it in the not-so-distant future. As this eventuality gets closer and closer, I have been getting a bit worried about what to do in terms of head covering. I am fine with wigs, but not in hot weather, which made me wonder what to do about my holiday this…

I haven't been on here in foreverrr! I'm horrible. So here is a little update! My last blog was in September. I'm happy to say my hair is still growing! I'm not sure how long it is,but I'll post a pic soon. I have a few bald spots but they are small. I noticed itty bitty hairs where the one spot is. : ) I'm hoping my hair will stay in but right now I'm just enjoying having my hair again. I feel bad that I haven't been on here. My life has been crazy. Alot of things have happened and I…

I work in a preschool and one day I was working with a group of 4 year olds. One of the boys at the table looks deep into my eyes and says "You don't have any eyelashes".(He is the first one to even notice after a year.) I said, "Nope, they all fell out". His response, "Did you make a wish?" I said, "Yup, I made several." Kids are too funny.

Just found this seller on etsy--these scarves look so cute and comfy!

So, just wanted to share a little grievance with you all and then you can all tell me I'm over reacting - but it's really got my back up.
Toni Warne = fantastic singer currently on talent show 'The Voice'. She's beautiful, talented and by appearing bald and talking about her alopecia - she's raising awareness for our condition which is totally lordable. However, If one more person tells me she reminds them of me or vice versa, I think I may scream!!!! Just because we have no hair, I'm…

How damaged are our immune systems??

Hey all,
It's been a while. How y'all doing?

I've never really been interested in the medical side of alopecia. I've never bothered with any medications or injections so I've not done too much thinking on it.

At the moment, I'm doing a little research. Does anyone have some good information on how alopecia affects the fuction of the immune system? I mean, on its affectiveness against infections and viruses? I know that I tend to get sick a lot more than any of my friends,…

I was diagnosed about six weeks ago with Alopecia Areata. This disease is very new to me. I tried the steroid solution and it just irritated my skin. Yesterday (4/23) was my first time getting the steroid shots. I was given 7. So how many of you have tried the steroid shots? If these shots do not work I am considering getting a biopsy done just to see what is going on and making sure there are not any other auto immune disease effecting my system. Also what has everyone been trying for their…

As usual I wear many wigs due to many patches and having to keep shaving my head.
My question is this: I am a smoker the only one in my home while i am wearing a wig, does anyone know if its safe to put the wig outside to air out to keep the smoke odour out?

Any suggestions would be great ty:)

Looking for a job

Hi folks,
I thought that I managed my baldness and that I had not any more to think about it, as I am going bald now for years. But I am searching a job now and I have had some interviews, but each time, they choosed the other person. Was it for the skills or for the 'first better impression' of a 'hairy' competitor? I want to believe that it was for better skills, but two (hairy) persons around me made me doubting... I guess the next challenge will be to add or take off a wig during…

I am new to this support site, but not new to Alopecia Areata. I have had Alopecia for 7 years, but this is the first time that I may actually need a wig. I am so stressed every morning pulling out handfuls of hair. I am no hesitant to make that step. I just don't want everytone looking at me noticing I have a wig on. I am taking Methotrexate - anyone tried this treatment? 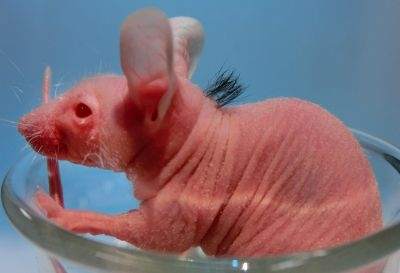 Handout picture taken on April 13, 2012 and released by the Tsuji Lab Research Institute for Science and Technology of the Tokyo University of Science shows a hairless mouse with black hair on its back at the laboratory in Noda, Chiba Prefecture. — AFP…